Today in this article, we will learn everything there is to learn about Snakes in Cyprus. We will also discuss where they are usually found and some interesting facts about them.

I am so excited.
Are you? Let’s get started.

Are snakes in Cyprus dangerous?

How common are snakes in Cyprus?

Snakes in Cyprus are common and usually found in the highways, forests, swamps, grasslands, rivers, streams, and tall and bushy grasses near houses. The majority of snakes in Cyprus can be seen while driving on the highways. The Large Whip Snake is the most commonly seen snake in Cyprus.

What are the kinds of snakes found in Cyprus?

In this section of the article, we are going to learn about the kinds of snakes found in Cyprus. As we already know, there are 10 kinds, let’s learn what they are and how they look. 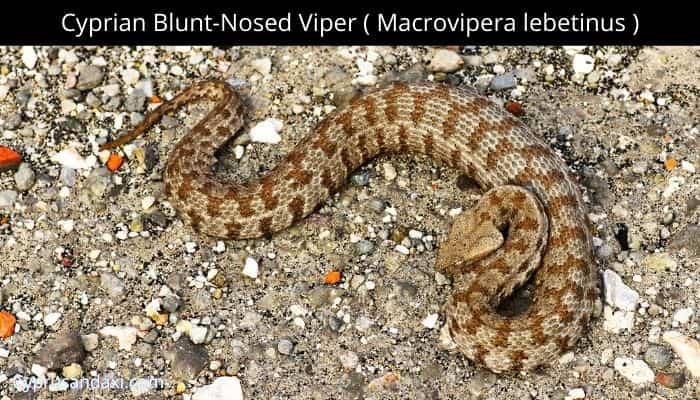 People in Cyprus call it “Kontonoura,” which translates to short-tailed. It looks like a commonly seen Viper snake and has a rounded and blunt nose.

Cyprian Blunt-Nosed Viper is the most lethal and poisonous snake in Cyprus. It can be easily recognized as it has a fat body and it’s not that long in length. In fact, the male snake is around 1.1 meters in length, and the female is around 1.5 meters long.

The head of Cypriot blunt-nosed Viper is broad in size, triangular in shape, and distinct from the neck. It is usually light brown, grey, and rusty in color.

Cyprian Blunt-Nosed Viper is usually seen near water sources and thick shady areas. Sometimes, it is found in swimming pools and lakes too.

If bitten by this snake, you are suggested to seek medical attention as quickly as possible. The bite is particularly painful as the fangs stay embedded in the skin and continue to pump venom. However, fatalities are extremely rare, with around 20 bites reported a year but no fatalities in the last 15 years.

Levantine Vipers are on the endangered list. As this is the most lethal snake in Cyprus, people kill it thinking that it will harm them. Additionally, it often falls prey itself to Whip Snakes and birds of prey. 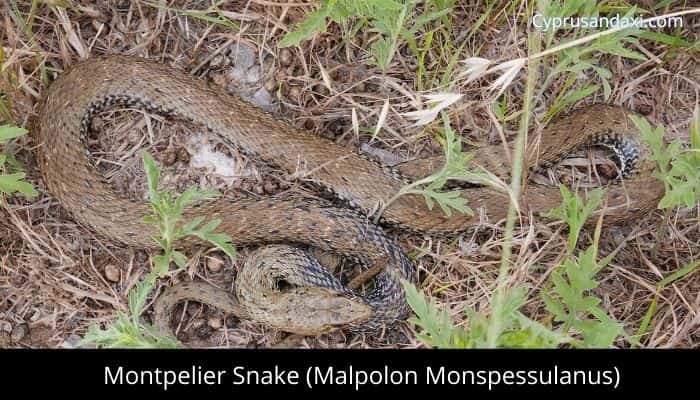 Montpelier Snake (Malpolon Monspessulanus) is the second-most venomous snake in Cyprus but it is not harmful to humans. The rear fangs of the Montpelier snake reduce the possibility of venom injection, and the venom is of low toxicity.

The two poisonous teeth of the snake are located quite deep which is why it’s practically impossible for it to bite through human skin, it can only grasp at a finger.

However, it can kill other small animals.

This snake is also called “Saitta” in Cyprus.

It is around 2 meters in length and may weigh up to 1.5 kgs. It is grey or brown in color.

Montpellier snake is usually active in the daytime and found in open grasslands. It mainly feeds on lizards and small birds.

It moves very quickly so you are unlikely to be bothered by it. It might react if teased or it senses some danger. If bitten by a Montpellier snake, you should seek medical attention, as the bite can swell quite a bit. Cat Snake is the third-most venomous snake in Cyprus and like Montpelier Snake, it is not harmful to humans. It also has rear-fangs and it really injects its venom in defensive biting.

The eyes of the cat snake become slit in bright sunlight like a cat. Hence, the name Cat Snake.

A Cat snake is a long-bodied snake with a large head and large eye. It is black, beige, green, or brown in color.

They are around 0.7 meters in length, but some cat snakes can grow up to 1.3 meters.

They prey on various species of lizards, small snakes, and birds, they also feed on other mammals in the wild.

Cat snakes can be found in open and scrubby country including beaches, open woodlands, rocky areas, and old uninhabited buildings. Coin Snake (Hemorrhois Nummifer or Coluber Nummifer) is another kind of snake found in Cyprus which is not harmful to humans.

It has a greyish-brown body and markings on its back that resemble coins, hence the name. It is comparatively bigger than other snakes and can grow up to 1.7 meters in length.

Another way to distinguish the coin snake is to look for a long thin tail and a glistening sheen on the skin.

It preys on rodents, lizards, and insects. It is not poisonous but can be very aggressive and is likely to attack if provoked, giving a painful bite.

It’s an excellent climber and can be spotted climbing vertical walls. The Cyprus Grass Snake (Natrix natrix cypriaca) is an endangered species of snake that is indigenous to the Island of Cyprus.

It is also called Ringed Snake or Water-Snake. People in Cyprus call it Nerofido.

It can be distinguished by its color itself. The grass snake is typically dark green or brown in color with a characteristic yellow or whitish collar behind the head, which explains the alternative name ringed snake.

Cyprus Grass snake can grow to a maximum length of around 180cm, making it the largest native terrestrial reptiles. However, it rarely reaches this maximum size.

However, the snake regularly exceeds lengths of one meter, with the female being larger than the male.

It can usually be found near water sources lakes, rivers, or reservoirs, and it prays on lizards, fishes, and frogs. It has a long thin tail and a small head. It is around 1.1 meters in length when fully grown.

The Cyprus whip snake is typically dark brown or olive-brown in color. In the past, Cyprus Whip Snake was mistaken for Large Whip Snake as they look similar. We will learn more about Large Whip Snake later in this article.

It can be found in the forest, shrubby vegetation, rocky, scrubby terrain, and water sources like ponds, lakes, and rivers.

It feeds on lizards, small snakes, insects, rodents, and insects. It can climb verticle walls. Large Whip Snake (Dolichophis Jugularis)  is also known as the Black Whip Snake is another kind of harmless snake found in Cyprus.

It is commonly found all over the island of Cyprus. Large Whip Snake is from 2 to 3 meters in length and it is considered to be the longest snake in Europe. It is black in color and the skin is shiny.

It has a brick color with dark brown spots until it grows to the age of 5-6 years old, while later it takes its characteristic black color. The snake can be easily spotted as it shines in sunlight due to its black color.

It is usually found everywhere, but it is mainly seen in fields, tall grasslands, highways, forests, and bushes.

Large Whip Snake is not venomous and it doesn’t harm humans but it becomes aggressive when threatened.

Along with Viper snakes, it feeds on small mammals, lizards, birds, and insects. The Large Whip Snake also can climb trees and hunt birds and insects from the tree. It is not harmful to human beings. It usually lives in dry and xeric environments in a wide range of habitats: in the desert and rocky land, in forests, woodland scrub, and agricultural land from sea level to 2,000 m (6,600 ft) altitude.

You can recognize it by seeing how it moves. When it moves, it holds its head above from the ground and points forward. This is why Dahl’s Whip Snake is also called an Arrow snake.

A full adult can grow up to 1.3 meters long. It is distinguishable by its large eyes which are surrounded by a band of yellow. It is usually brown in color. The head and neck have black spots and the body is brown and sometimes pale pink with diamond patterns on it. The front part of the body is brighter than the back.

It preys on small lizards and insects. It can climb trees and bushes and is often found wrapped around them. Dwarf Snake (Eirenis Modestus) is one of the non-lethal snakes found on the island of Cyprus. It is not venomous to human beings.

As the name suggests, the Dwarf Snake is a pencil-thin small structure snake and it can grow a maximum of up to 60 cm in length.

It can be distinguished from its color. The skin is smooth and the edges of the scales are slightly darker than the centers. The upper surface of the body is a uniform yellowish-brown, greyish-brown, or reddish-brown color and the underparts are glossy white.

Its natural habitats are dry shrubby vegetation, cultivated fields, fallow areas, rocky hills, and dry open woodland. As it always hides under the rock, it is hardly seen around.

It is not poisonous, but if bitten, it’s suggested to seek the medical attention. Worm Snake (Xerotyphlops vermicularis) is another kind of snake found in Cyprus. It goes by different names, such as:

People in Cyprus call it “Anilios”.

It looks like a worm and is very small in size. It is not harmful to humans.

It’s called a worm snake because of its characteristics. Not only it looks like an earthworm, but it also lives underground too. In some places in the world, people even can’t distinguish an earthworm from a worm snake. They are very similar in size and color.

It can grow up to 35 cm in length. Even then, it looks like an overgrown earthworm.

As it lives underground, it’s usually not seen around. It has tiny eyes and senses prey by movement.

Worm snake feeds on ants, spiders, and other smaller insects. If attacked, it uses its spiny tail to ‘sting’ although it carries no venom.

What snakes are endemic to Cyprus?

Cyprus Whip Snake (Hierophis Cypriensis) and Cyprus Grass Snake (Natrix natrix Cypriaca) are endemic to Cyprus. Other 8 snakes are found in other countries too.

How can I protect myself against snakes?

First of all, don’t tease them and don’t provoke them. As most of the snakes that are found in Cyprus are not harmful to humans, they won’t bite you until they feel threatened. Always keep your surroundings clean. Cut the tall grasses around your house. Wear proper boots while trekking around forests or hilly areas.

It’s not that only you are afraid of the snake. The snake is also afraid of you. So, don’t threaten it, and you should be safe.

I hope you have read the article completely till the end. If you did, then now you know a lot about Snakes that are found in Cyprus.

Maybe next time when you are in Cyprus, you will get to see one of the snakes and it goes exactly as you have read in this article.

You saw how the snakes look like. You even got to see the videos. What do you think? Let me know in the comment section below.

Also, snakes play a huge role in our ecosystem. They will never ever try to bite you until they feel threatened. Directly or indirectly, we need snakes to preserve our nature. Humans and Snakes are co-dependent. Keep this in mind if you ever thought of killing one.

Have a good day!

Are There Sharks In Cyprus?

Are there mosquitoes in Cyprus?

When does it snow in Cyprus?