The majority of people out there think that the Republic of Cyprus is a part of Greece.

Some people even think that Cyprus is an Arab country.

But the question is, “Is Cyprus really a part of Greece or an Arab nation?”

And the answer is No, it’s not. It’s neither of them.

Cyprus is actually an independent island country in the Eastern Mediterranean.

You can read here to understand better how Cyprus is different from Greece and why Cyprus isn’t an Arab country?

People even assume Arabic is the official language of Cyprus.

Let me tell you something. It’s not.

Greek and Turkish are actually the official languages of Cyprus.
Not only those, but the people in Cyprus speak a lot of other languages too. Today in this article, we will discuss what languages are spoken in Cyprus.

The official languages of Cyprus are Greek and Turkish.

Cyprus is actually divided into two parts; the southern part and the northern part.

The majority of the people in the Southern Part of Cyprus speak Greek.
Likewise, Turkish is mainly spoken in the northern part of Cyprus. English is considered the semi-official language of Cyprus.

Almost 80% of people in Cyprus speak English. Be it the southern part, or the northern part, English is used in almost every sector.

If you are in Cyprus and don’t know any words in Greek or Turkish, you don’t need to worry. English is enough to have a conversation with the Cypriots.

Be it road signs, restaurant menus, advertisements, and public services; they are all written in English too.

International companies in Cyprus use English as the official language. Students are taught in English.

Be it Shops, Malls, Markets, Restaurant, or even small areas; you will always find people there to communicate in English.

Vernacular language is a type of language that is used in everyday life by the general population in a specific geographical or social territory.

Cypriot Turkish is a dialect of the Turkish language spoken by Turkish Cypriots, mainly in northern Cyprus. Like Cypriot Greek and Modern Greek, Cypriot Turkish and Standard Turkish are also different from each other.

Cypriot Turkish is distinguished by a number of sound alternations that are not found in standard Turkish.

A minority language is a language spoken by a minority of the population of a territory. Such people are also called linguistic minorities or language minorities.

Armenian and Cypriot Arabic languages are considered the minority languages of Cyprus.

They aren’t widely spoken in Cyprus but are protected by the European Charter for Regional or Minority Languages (ECRML).

There is also another minority language in Cyprus called Kurbetcha, and it is mainly spoken in Northern Cyprus.

This language is spoken by the Romani people living in the northern parts of the country. The language uses Romani vocabulary and Cypriot Turkish grammar. 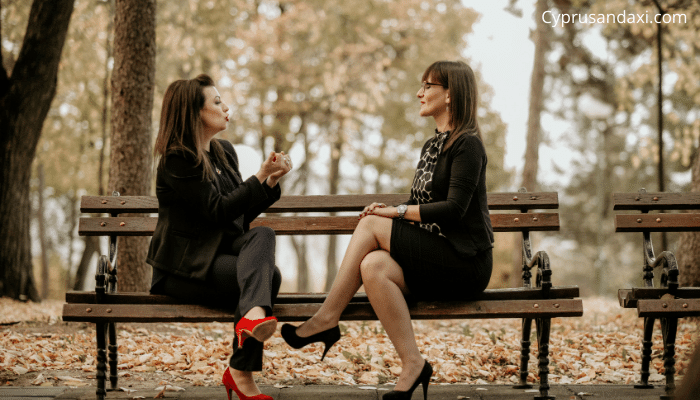 Sign Language is a visual means of communicating using gestures, facial expressions, and body language. Sign Language is used mainly by people who are Deaf or have hearing impairments.

The languages brought to Cyprus by the immigrants are called immigrant languages.

Some of the immigrant languages are:

Cyprus is home to many international students, housemaids as well as general workers. The majority of them are from Asia and Africa.

So languages from those continents are also spoken in Cyprus.

To know more about Cyprus, I suggest you read the following articles: